Arseny Mikhailovich Avraamov (born Krasnokutsky, 1886, died Moscow, 1944) was an avant-garde Russian composer and theorist. He studied at the music school of the Moscow Philharmonic Society, with private composition lessons from Sergey Taneyev. He refused to fight in World War I, and fled the country to work, among other things, as a circus artist. Returning in 1917, he went on to compose his famous “Simfoniya gudkov” and was a pioneer in Russian sound on film techniques. Among his other achievements were the invention of graphic-sonic art, produced by drawing directly onto magnetic tape, and an “Ultrachromatic” 48-tone microtonal system, presented in his thesis, “The Universal System of Tones,” in Berlin, Frankfurt, and Stuttgart in 1927. His microtonal system predated the creation of the Petrograd Society for Quarter-Tone Music in 1923, by Georgii Rimskii-Korsakov.

Today, his most famous work is Simfoniya gudkov (Гудковая симфония, “Symphony of factory sirens”). This piece involved navy ship sirens and whistles, bus and car horns, factory sirens, cannons, the foghorns of the entire Soviet flotilla in the Caspian Sea, artillery guns, machine guns, hydro-airplanes, a specially designed “whistle main,” and renderings of Internationale and Marseillaise by a mass band and choir. The piece was conducted by a team of conductors using flags and pistols. It was performed in the city of Baku in 1922, celebrating the fifth anniversary of the 1917 October Revolution, and less successfully in Moscow, a year later. [source]

“By knowing the way to record the most complex sound textures by means of a phonograph, after analysis of the curve structure of the sound groove, directing the needle of the resonating membrane, one can create synthetically any, even most fantastic sound by making a groove with a proper structure of shape and depth”.

From “Upcoming Science of Music and the New Era in the History of Music” by Avraamov, published in 1916. 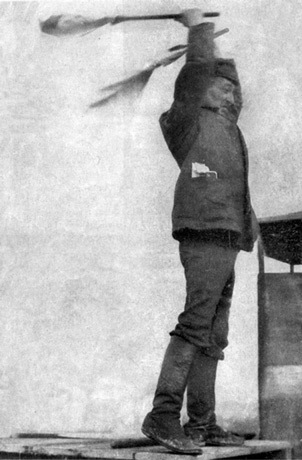 Carl Nielsen´s Wind Quintet or, more correctly, the Quintet for Flute, Oboe, Clarinet, French Horn and Bassoon, Op. 43, was composed early in 1922 in Gothenburg, Sweden, where it was first performed privately at the home of Herman and Lisa Mannheimer on 30 April 1922. [source]

Sonata Op 25 no 4 dates from 1922, when Paul Hindemith was still casting about for stylistic models, and leans heavily on the expressionist Bartók of that period, especially in its beefy piano part.