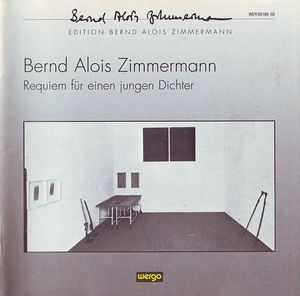 Bernd Aloïs Zimmermann‘s definitive statement was Requiem für einen jungen dichter (Requiem for a Young Poet, 1969-1969), a massive requiem scored for three choruses, soprano, and bass soloists with speaking parts assigned to actors and persons within the chorus, organ, electronic tapes, a jazz combo, and an orchestra of Straussian proportions. Working with a multiplicity of texts, Zimmermann originally had planned to limit the words used to those of young poets who had committed suicide, for example, the revolutionary Soviet poet Vladimir Mayakovsky. Zimmermann ultimately found himself opening up to all kinds of verbal sources in multiple languages; political speeches, passages from the Latin Vulgate, the voices of Chairman Mao, Hitler, and even a snatch of the Beatles’ “Hey Jude.” What Zimmermann constructed in the end was a powerful requiem not just addressed to the ill-fated poets, but to the twentieth century as a whole and its crisis of media overload in what is now called “data smog.”

Although Requiem für einen jungen dichter was instantly hailed as a masterwork upon its premiere in 1969, and is referred to in literature about contemporary music as a major achievement, it has nevertheless long remained one masterpiece that nobody could hear. A limited edition LP of the premiere was pressed up and sold as a fundraising item for charities; a CD version of this performance was released at one time by Wergo, but for some reason seems impossible to obtain. Working with a consortium of Dutch institutions, including the Dutch Catholic Radio Broadcasting Organization, the Kunststiftung NRW, and others, Cybele Records has produced a stereo multichannel, surround sound super audio CD of the Requiem, drawing from a rare performance given in Haarlem in 2005 and led by conductor Bernhard Kontarsky.

One astounding aspect of Requiem für einen jungen dichter is that it isn’t in the least dated; it sounds like what an avant-garde composer might do in 2008 if he or she had access to such enormous resources and artistic ambition as Zimmermann. The surround sound is terrific in projecting the various voices in the tapes into all the directions Zimmermann intends; speaking voices from tape and live voices from the stage mesh together in a blend that is effective and terrifying in its dense web of controlled confusion. When the three choruses are all given to yelling at once, the very sound of it sends chills up one’s spine. All of the spoken material is included in the booklet, reproducing Zimmermann’s layout of paragraphs of multilingual text side by side and matched to time points in the performance, though this is rendered in print so tiny one may need a magnifying glass; several score pages are likewise reproduced, plus a diagram of the performance and numerous photographs. Cybele’s effort on behalf of Zimmermann is truly comprehensive and impressive and restores to twenty-first-century listeners this great, gigantic work that served as Bernd Zimmermann’s final testament.