Sofia Asgatovna Gubaidulina, (born October 24, 1931) is a Russian composer of half Russian, half Tatar ethnicity. Until 1992, she lived in Moscow. Since then, she has made her primary residence in Germany, outside Hamburg. The Lyre Of Orpheus is composed in 2006, recorded July 2006 at Lockenhaus Festival and released in 2012 on the CD Canticle Of The Sun.

At a subterranean level, “The Lyre of Orpheus” is also an exploration into the physics of sound, with pulsating difference tones informing its underlying structures. Gubaidulina explains: “One can conceive of an imaginary pulsating space where the pulsation of the difference tones corresponds to the sounding intervals. Projected onto the tonal area which we can perceive, a specific correlation is formed between this pulsation and the sounding interval which produces the difference tone. One can experience this correspondence in an artistic work as a metaphor for a profound correlation between processes taking place in time and processes within the sound world, but also as a pronounced factor of formal organization.” [source]

Gubaidulina’s music is marked by the use of unusual instrumental combinations. In Erwartung combines percussion (bongos, güros,temple blocks, cymbals and tam-tams among others), bayan and saxophone quartet.

For Gubaidulina, music was an escape from the socio-political atmosphere of Soviet Russia. For this reason, she associated music with human transcendence and mystical spiritualism, which manifests itself as a longing inside the soul of humanity to locate its true being, a longing she continually tries to capture in her works. These abstract religious and mystical associations are concretized in Gubaidulina’s compositions in various ways. Gubaidulina is a convinced Russian-Orthodox believer. The influence of electronic music and improvisational techniques is exemplified in her unusual combination of contrasting elements, novel instrumentation, and the use of traditional Russian folk instruments in her solo and chamber works, such as De profundis for bayan, Et expecto- Sonata for bayan, and In croce for cello and organ or bayan.

Another influence of improvisation techniques can be found in her fascination with percussion instruments. She associates the indeterminate nature of percussive timbres with the mystical longing and the potential freedom of human transcendence.

A profoundly religious person, Gubaidulina defines “re-ligio” as re-legato or as restoration of the connection between oneself and the Absolute. She finds this re-connection through the artistic process and has developed a number of musical symbols to express her ideals. She does it through narrower means of intervallic and rhythmic relationship within the primary material of her works, by seeking to discover the depth and mysticism of the sound, as well as on a larger scale, through carefully thought architecture of musical form.

Gubaidulina notes that the two composers to whom she experiences a constant devotion are J.S. Bach and Webern. Among some non-musical influences of considerable import are Carl Jung (Swiss thinker and founder of analytical psychology) and Nikolaj Aleksandrovich Berdiaey (Russian religious philosopher, whose works were forbidden in USSR, but nevertheless found and studied by the composer). [source] 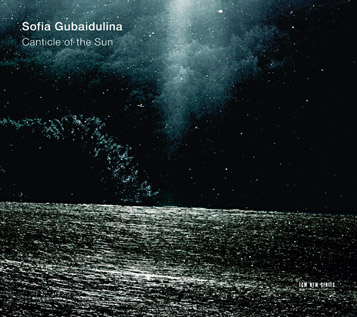