From the album Studies For Player Piano by Conlon Nancarrow, recorded on Conlon Nancarrow’s custom-altered 1927 Ampico reproducing piano at the studio of the composer in Mexico City on January 10 and 12, 1988.

Conlon Nancarrow’s Studies for Player Piano is a cycle of work unique in many respects, not the least being its seeming indivisibility from itself. As the primary text of the music is a hand-punched piano roll intended to be played on specific, Ampico model player pianos, it does not lead to a wide range of options in terms of interpretation. Studies for Player Piano, stems from master tapes made in Mexico City for release on the 1750 Arch label in the 1970s and ’80s, with Nancarrow´s own specially retrofitted pianos, in Nancarrow´s studio, and with the composer himself picking tempos and working with producer Charles Amirkhanian to achieve ideal results. These recordings were considered state of the art at the time and still sound great, and can certainly be considered definitive; CDs drawing from sources made later represent the music as played back by other machines and operators. While the differences might be slight, they are still significant, particularly in regard to tempo choices, which can either make or break this music, and breaking it isn’t hard to do at all. Hearing them played back on Nancarrow´s pianos also affords an additional layer of articulation missing from many reproductions; one of Nancarrow´s pianos was fitted with metal hammers, resulting a clattery sense of attack, whereas the other had hammers covered with leather strips for a more mellow sound. Make no mistake about it: the Other Minds set truly represents what Nancarrow himself wanted you to hear when it came to his player piano music, and he did have very specific ideas about that. [source] 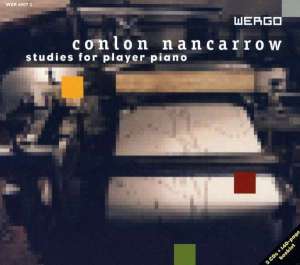