String Quartet no. 5  is composed by the danish composer Rued Langgaard. Here played by Kontra Kvartetten:

Rued Langgaard (born Rud Immanuel Langgaard; 28 July 1893 – 10 July 1952) was a late-Romantic Danish composer and organist. His then-unconventional music was at odds with that of his Danish contemporaries and was recognized only 16 years after his death. [source]

The danish filmproducer Peter Aalbaek who normally work together with Lars Von Trier is planning to make a feature movie about Rued Langgaard. Aalbaek has been fascinated by Langgaards history throughout his career, and his graduation film from the Film School also portrayed the composer. 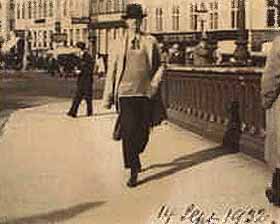